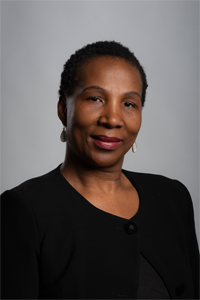 Adv Nomvula Mokhatla completed a B Proc degree in 1995 followed by an LLB in 1997 at the University of Natal. In 1999 she graduated with a Higher Diploma in Trial Advocacy at the National Institute of Trial Advocacy, Colorado, USA. She did her pupillage at the Durban Bar focusing on criminal cases.

In 2000, she relocated to Pretoria where she joined the Pretoria Bar. In 2002 she moved to the Johannesburg Bar where she became one of the founder members of the Advocates for Transformation (AFT). She also became a member of the Bar Council.

She later joined the Department of Justice & Constitutional Development’s Litigation Unit as a Senior State Advocate. Whilst performing her court duties, she offered training to fellow advocates in the office, SAPS Heads and in the State Attorney office. Through her intense involvement with the Black Lawyer’s Association (BLA), she got commissioned to tutor trial advocacy in Namibia, Botswana and Lesotho.

She had a stint as a Magistrate at the Pretoria Central Magistrate’s Court. During this time; she adjudicated over criminal and civil matters.

Her star continued to shine; in 2009 she proceeded to higher institutions of learning lecturing in South African universities imparting her vast knowledge on high court litigation and trial advocacy.

She sat as an assessor in over twenty criminal trials in the High Court. Her passion for transformation shines through her career. She continues to stay on top of her game by attending advanced Constitutional litigation seminars and other seminars on various aspects of the law including banking, Road Accident Fund, tax, mining, energy and environmental matters.

She was appointed a Deputy National Director of Public Prosecutions with effect from 22 December 2010. She is responsible for the Legal Affairs Division (LAD).

Briefing of Portfolio Committee on Justice & Correctional Services, 07 May 2021